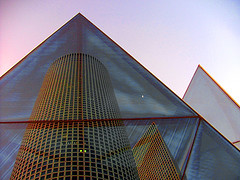 Pyramid Power is now being used in various important sectors which are very effective for Human Life, some of such sectors are VAASTU, Astrology, Color therapy, Spiritual Meditation and Medical Healing Thousands of Techniques are being innovated and implied by Pyra energy scientists and experts which are proving their miraculous worth towards the betterment of Human Life on Earth.

One of its main functions is to remove or recycle stagnated and negative energy and focus harmonising energies.

Research and experiments have shown that pyramid powers change the mental, physical and emotional states of individuals who have been exposed to its vibrations.

It improves the aura of a person and this has been proven with the use of the Kirlian camera to capture the aura of an individual.

The Kirlian photographs show clearly the difference in the size and quality of the aura after an individual has been exposed to pyramid power.

In India, temple architecture is based on pyramidal shapes. The design also incorporates domes and the main idol is placed under a pyramid-shaped roof to generate energy among devotees.

This is why people visiting Hindu temples with such roofs come away feeling cleansed and energetic.

Vaastu is a science of architecture, energy flow, and magnetic vibratory force. Vaastu takes into account the five elements viz; Earth, Water, Fire, Wind and Sky. The principles of Vastu are mainly dependent on the arrangement and balancing of these five elements in their proper order. Vaastu is the science of balancing Cosmic energy field levels of a Plot, House, Flat. Office, Factory, Temple etc. Any specific surroundings and making them suitable for the person staying there for the upliftment and betterment of their Physical, Mental, Emotional, Spiritual and social Growth, which in turns led their life towards Happiness and Overall Prosperity.

A house designed and constructed taking into account the principles of vastu shastra will transform the life of the person staying in it. They enjoy good health, wealth and peace of mind. Even luck favours them. No evil spirit or thought will germinate in this dwelling. There will not be any adverse effects on the occupants. The Principles of Vaastu also keep in view the cosmic influence of the Sun, it's light and heat, the direction of wind, the magnetic field of the earth and the influence of the cosmos and various planets.

Vaastu defects refers to any hurdle or obstacle in the way of cosmic energy flow in a house, plot, Flat, Factory, Temple etc which adversely affects and disturbs :

This creates an uncomfortable environment for the people staying in that place and this "DISHARMONY" of Cosmic energy fields or Bio energy forces of a place may be called as Vaastu defect.

These can be described as Feeling of instability, Tensions, Severe Health Problems, Unexpected Financial losses, Defamation, Tense Marital and family relations, Sudden demise of loved one, Litigations, Enmity, etc. are numerous effects which may be the outcome of vaastu defects. The severe ness of effects of vaastu defects of a place is directly related to the density of vaastu defect present at that place

If a house or industry or farm is against vaastu principles, correcting it with pyramids will help a lot. If there is a vaastu dosh (defect) in the plot we must start with correcting it from the centre. The centre of the plot is very important. We must try to make it strong by installing the yantra in the centre. Install the yantra parallel to the North.

Any other vaastu defect can be corrected with the help of this yantra and also a few minor changes. The pyramids are a boon to mankind and can solve many of our present day problems and diminish the stress and unhappiness created by minor vaastu dosh.

There are various ways and methods to correct a vaastu defect :

Physical Correction Method : In this method after diagnosis of a vaastu defect real constructions and demolitions are used to harmonise the cosmic energy fields and bio energy flow of a particular place. Though if done with correct calculations this is the accurate, permanent and fruitful method but because it is a very expensive method and sometimes it is not possible to make physical change for every person (Particularly when he is living in a flat of a multistoried building). So it is not a very practical method in this 21st century.

Spiritual Correction Method : In this method various relegious rituals like poojas, Japas, yagnas are performed at the place of vaastu defect to harmonise and increase the Bio-energy flow of that place, Though this method has proven result giving but for a very short & almost negligible time period. It requires regularity in performing these rituals which is not feasible for a common man in this modern age.

Virtual Correction Method : This is the most scientific and reliable method of Vaastu corrections at any place. In this method, after diagnosis of vaastu defect various instruments which enhance and harmonise Cosmic energy fields and Bio energy flow are installed at the place of defect which virtually corrects the defect. This is not a new method. Our ancestors were also using this method by installing various instruments like MERU PRISHTH, SHREE YANTRA, SHANKUs etc. for vaastu corrections along with the spiritual and religious rituals as given in spiritual correction method. Now In this modern scientific age when the breakthrough in the area of MIRACULOUS PYRAMID ENERGY & POWER has taken place and numerous researches on the subject have proved that the cosmic energy fields and Bio energy flow of any place can be easily ENHANCED and HARMONISED by installing PYRAMIDS and all types of Vaastu defects can be corrected virtually which really gives long lasting results in the subject. This Method is most suitable and gained popularity because it is EASY, ECONOMICAL and FEASIBLE for all with the Miraculous Results.

The pyramid yantra is a miniature version of a pyramid. It can be a single pyramid or a set (usually in multiples of nine) of pyramids arranged either horizontally or vertically (one above another), called 'multier'.

Though stone, being natural, is the best material for making pyramid yantras, it is difficult to accurately carve miniscule pyramids on it. Hence neutron polymers are used. The colour of the yantra should preferably be white so that it can absorb energies of all colours of the spectrum. Metals should never be used, as that will short-circuit the smaller pyramids inside.

Pyramid yantras help balance the 'fa' (father, masculine) and 'maa' (mother, feminine) energies. Their own fa and maa energies are balanced, which harmonizes the space in which they are kept. In turn, the entire house's fa and maa energies are harmonized. This is because the pyramid yantra, when placed in a room, brings about negative ionization and reduces the proportion of positive ions, thus revitalizing the air.

Activating the Brahmasthala
In vaastu, the brahmasthala (center of the house) is given much importance. To activate it, placing nine multier pyramids inside a pit dug at the center of the home.

Rectifying an irregular shaped plot: One can use pyramid yantras to create a square or rectangle by activating the brahmasthala and making angles with pyramids in the corners of the plot. Similarly, if a plot does not have a center, it can be divided into sub-plots and symmetries can be carved accordingly.

For Multi-Storied Apartments
You can either fix nine multier pyramids on the ceiling, or place some pyra chips (miniscule pyramids) beneath tiles or even fix a pyramid yantra in the centre of any wall.

For an Obstruction in the Center
If there is a wall in the center of the home, the dosha can be rectified by placing three multiers on the wall along with pyra angles (L-shaped pyramids) on the four corners. If there is a staircase, you can put eight pyramid multiers around it or fix pyra-strips on the ceiling above it. If there is a pillar in the center, divide the plot into two using pyra-strips and activate the centers of each sub-plot separately.

For the Kitchen
Kitchens facing the toilet are against vaastu, which can be rectified by fixing a pyramid yantra on the ceiling, facing downwards, between the two doors. If one has to cook facing the south, which is against vaastu, then multier pyramids should be fixed on the southern wall.

For the Bedroom
You can create a southwest facing bedroom, in case it is oriented otherwise, by fixing three pyramids each at the southern and western walls of your bedroom. If your bedroom faces a toilet, mirror or a door, which is not vaastu-compliant, then you can fix some pyramids in between. You can enhance the quality of your sleep by placing nine specially designed 'vaastu sleep pyramids under your mattress.

Er. Rameshwar Prasad invites you to the Wonderful World of Pyramid Vastu 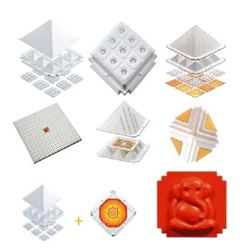 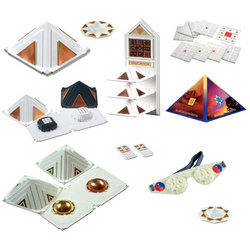 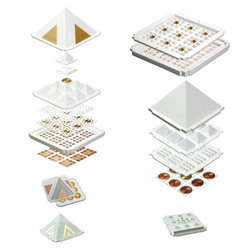