The aim of human life is to wish for the welfare of all while carrying on the responsibilities of worldly deeds. For all sorts of good deeds, towards the family and other people, for inspiration and performances, all deeds are closely related to building a house. For benevolence point of view every one should contribute and co-operate with the government bodies in the plans of constructing and managing Dharam-shalas, well, pond temple, grains depot etc., and also such deeds should be performed individually by everyone. 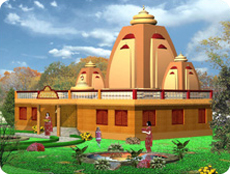 In olden times, rich and wealthy persons had been materialising such plans under the culture and religious activities in our country. In modern period also educational institutions Dharamashala, Rain Basera (overnight camp), water hut, temple, etc. are constructed and are managed for the benefit of common people by donors and wealthy persons in the society. Welfare of all is possible only when every one in this world bears the responsibility of carrying on the business of the world by his good deeds thinking the supremacy of the creator of this world in himself.

Objective of the man in this life is not only the welfare of himself and the family, but also everyone has to earn reward for good deeds (Punya) such as construction of temple etc. for which he receives in return fame and growth of family; other people also get inspiration from such noble deeds for benevolence.

There are so many ways of benevolent deeds. Construction of temple, well or ponds for drinking water for the public, Dharamshala etc. are some important deeds. Vastu Shastra has described the importance and types of such works.

Those who get a temple constructed at a beautiful site, where there are lush gardens and sufficient water in wells, ponds etc. for the sake of enhancement of religion and fame, will definitely gain heavenly pleasure. The land of construction of a temple should be tested; only such land is good and auspicious for construction of a house; selection should therefore be made as per directives given for selection of site elsewhere in this book.

For construction of temple, Vaastu-pad of sixty four squares should be made. Main gates should be constructed in the centre of all the four sides, which is auspicious. Half of the breadth should be kept for the Garbhgriha (Central room where idol is to be placed). All round the Grabhagrih, on hath (cubit) wide path should be provided for circumambulation (Parikrama) and then the wall be constructed around it. One fourth of the breadth of Garbhgrih should be the width of the door. Height of the door should be twice the width of door. The temple or place of worship should be in the north-east portion of the building. This is the best direction for worship and prayers according to Vastu Shastra. Though all the directions are good and auspicious by the grace and kindness of the supreme God, but  self-satisfaction and spiritual peace is obtained only from prayers offered in the north-east direction.

In south India even today we find the live proofs of temples constructed as per principles of Vaastu Shastra. These are strictly in conformity with the principles laid down in Indian culture and Vaastu Shastra. Buildings which have been constructed after proper auspiciousness of the land etc. are famous and popular throughout the world.

Takshshila University, Mohenjodaro, Taj Mahal, Several palaces and temples in India have a prominent place in the art of Vaastu not only in India, but in the whole world.

In South the Tirupati Balaji temple, Rameshwaram temple, Meenakshi temple in Madurai, Vivekanand memorial in Kanyakumari, Jagannath temple in Puri, Badrikasram in the north, Kamakshyadevi temple in Assam, Vishwanath temple in Varanasi, are some such places where people feel mental and spiritual peace as desired.

Whether it be a temple of a well, pond etc. or a house, it is the proper selection of land and direction etc. and construction at proper and auspicious time (muhurt) according to the principles of Vaastu Shastra, that it's fame spreads far and wide even after thousands of years have passed. Those buildings which have become by Vaastu-Shanti and Vaastu Pooja. It is good and auspicious to do so, as it will remove default regarding Vaastu if any from that building.

North-East direction is very important in the construction of a building. This direction should be very well considered. No large and heavy rooms or materials should be kept in this portion. The owners cannot progress if they do so, nor can the inmates develop and flourish. If this portion is extended outwards and open, it provides all happiness, mental and spiritual peace prosperity and progress.

North-East direction is best for offering prayers to God, so temple or Pooja room should be made in this direction and it is auspicious to offer prayers and worships sitting face towards east or north.

Dakshinayan and Uttarayan must be considered for consecration of idols. It is auspicious to establish and consecrating the idols of Shiva ling in the month of Shravan, of goddess Durga (Bhagwati Jagadamba) in Ashwin, and lord Vishnu in Margshirsh. Gods having hot temper, such as Bhairav, Narsingh, and Mahishasur Mardini Durga should be established and consecrated in the period of Dakshinayan and those of calm noble temper in the period of Uttarayan. The day, date (tithi), Paksh (fortnight), constellation, Lagna etc. should also be considered for the purpose.