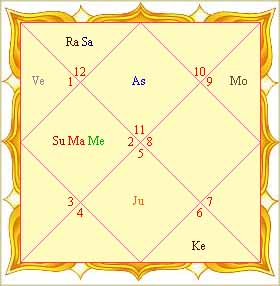 In Hindu astrology the horoscope may be broken down into several vargas, or divisions. Although as many as 16 basic divisional (Shodashavarga) charts exist. The birth chart, divides the zodiac into 12 equal portions of 30 degrees each. The natal chart is the most fundamental chart in analysing an individual or event as it reveals the basic tendencies inherent at a particular time.

There are other ways of dividing the zodiac, and these are represented in the vargas, or harmonic charts, of Jyotish. There are 16 vargas defined in the Brihat Hora Shastra (one of the basic references of Vedic Astrology) of Parasra (the founder of Vedic Astrology). Each varga has a particular method of construction based upon the fundamental, or birth chart, varga, and relates to a specific aspect of life. Most astrologers only concern themselves with the navamsha or 1/9 division.

For example, the Navamsah varga is considered the most important varga after the main natal chart as it provides insight into the moral and spiritual nature of an individual.

The 16 vargas (Shodashavarga) of Parasara and their meaning are listed below (the numbers in brackets indicate the harmonic degree, or the number of divisions each sign is broken into) :

How to use the Varga Charts

Vargas which divide signs into 12 or less parts provide insight into the areas of life given by the bhava (house) which is equal to the number of divisions. For example, the Navamsa (harmonic 9th) provides insights similar to the 9th bhava, such as moral, ethical, and religious character. The Hora (harmonic 2nd) relates to wealth, similar to the 2nd bhava.

A simple way to begin using the vargas is to look at the disposition of the lagna (ascendant) ruler. For example, if in the Drekkana (harmonic 3rd), the lagna is Aries and Mars (the ruler of Aries) is in the 12th bhava (house of loss, foreign associations), it may indicate a lack of success in one's own efforts or loss due to foreign influences.