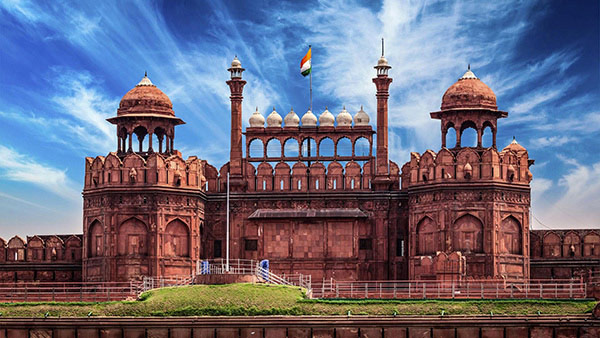 The Indo-Islamic style provided spaciousness, massiveness and breadth to the Hindu architecture. In almost all the prominent buildings, the arch, Minar and dome began to be used and the mosque or Masjid became a part of the landscape. The chief means of decoration was surface decoration through the use of geometry, arabesque and calligraphy. The Muslims borrowed the design of kalash on the top of the Hindu temple by placing a dome on the top of their buildings.

The most important symbol of Indo-Islamic architecture in India is the tomb or the mausoleum which evolved from the basic cube and hemisphere of the early phase into a more detailed form during the Mughal period. In the Mughal period multiple chambers were made and tombs were set in gardens, known as the Char-Bagh. The tomb chamber houses the cenotaph below which is the grave. The most famous example of tomb in India is the Taj Mahal.

The Mughal Architecture occupies a significant place in the history of Indian Architecture. The Mughal architecture developed with the efforts of Akbar. Akbar cleverly incorporated foreign influences into indigenous style. Some of the basic features of the Mughal Architecture are the round domes, high minarets, mehrabs, pillars, open courtyards etc. A notable feature of the Mughal architecture was the use of red sandstone. It is interesting to note that red sandstone was used for construction of huge buildings and forts. However red sandstone was replaced with white marbles replaced it during the later period when the stress was more on beautifying of the buildings with the use of colored designs, precious and semi-precious stones, gold and silver waters and minute carvings. 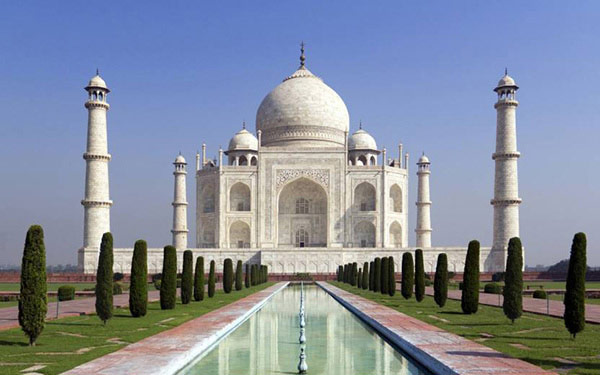 For invading Muslims, India, served as a home, and it was here that Persian architecture was experimented with and perfected. Islamic architecture in India can be classified into three sections: Delhi or the Imperial style, from 1191 to 1557AD; the Provincial, encompassing the surrounding areas like Jaunpur and the Deccan; and the Mughal, from Babur to Aurangzeb (1526 to 1707AD), although the last of the true `Great Mughal Emperor’ was not much of a great builder.

Muslim architecture can be subjected to another classification, this one being a little simpler religious and secular. The mosque or masjid still stands as a constant reminder of Muslim art in all its simplicity.

The masjid, or place of prostration, is the all-important construction of the Muslims. It is also the key note of the Islamic style. Based on a humble design, it follows the principle of the somewhat discreet dwellings of Mohammad, the founder of Islam in Medina in Arabia. The religion itself condemns the use of idols, or that of any fanfare, and this principle was kept in mind while building mosques.

Prayers are meant to be offered in the open air, ascertaining that nothing stands between man and the God. That was the original intent, but somewhere along the way the hand of man intervened.

The mosque is basically an open courtyard surrounded by a pillared verandah, crowned off with a dome. The enclosed space provided respite from distractions from outside. A water tank also seeped in as a convenience for devotees to wash and cleanse themselves before they prayed to Allah. Prayers are always offered facing Mecca, the holy pilgrimage for all Muslims. The pillared verandahs gradually got neighbors in the form of a wall containing an alcove called mihrab, indicating the direction or qibla for prayer.

Towards the right of the mihrab stands the mimbar or pulpit from where the Imam (religious head) presides over the proceedings. An elevated platform, usually a minaret from where the Faithful are summoned to attend the prayers is almost always a necessity.

But it was only during a much later period that minarets began to be included as a device for carrying the muezzin’s (person who calls the Faithful to prayer) voice further.
However, during Prophet Muhammad’s time, mosques were free of minarets, possibly to ensure that it’s height and was not misused to spy into nearby homes. 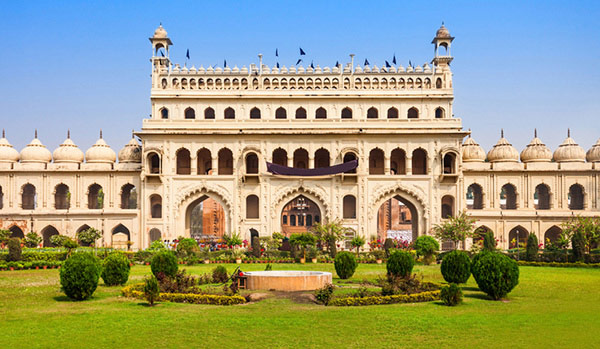 In every city there will be a Jama Masjid (Arabic: Al-Masjidu’l Jami meaning the Collecting Mosque) where the faithful assemble for the Friday prayer or Jum’ah. (See Jama Masjid under Delhi).

It was soon discovered that additions were required to this basic structure, but that seemed to create a problem. Obviously the mihrab couldn’t be tampered with for this was the most important place. So the outer sections were dealt with; the idea was to make it look like a house of prayer without making any drastic changes on the inside.

Towards the outside a screen was thrown to ward off evil eyes, and a dome was raised.

Coordinating all this was a problem, and Indian builders never did get it right. The early phase in mosque building in India presents a consistent disharmony between the front elevation and the dome, and in almost every mosque the view of the dome is hampered by the parapet. However, this doesn’t mean that the view from the back is equally bad. The cause of such an incoherent approach to building can be attributed to the immature design of the earliest examples, the Qutub in Delhi and Arhai Din Ka Jhonpra in Ajmer, which were essentially built on the foundations of temples. Their defects were adhered to in following constructions due to force of tradition. Wherever Muslim monuments were built with temples as the basic structure, this disharmony prevailed.

Although not actually religious in nature, the tomb or maqbara introduced an entirely new architectural concept. While the masjid was mainly known for its simplicity, a tomb could range from being a simple affair (like Emperor Aurangzeb’s tomb in Aurangabad) to an awesome structure enveloped in a grandeur which has to be seen to be disbelieved (the glorious Taj Mahal in Agra).

The Aryans and subsequently the Hindus never marked the place of their dead simply because they didn’t bury them; instead immersing their ashes in rivers. 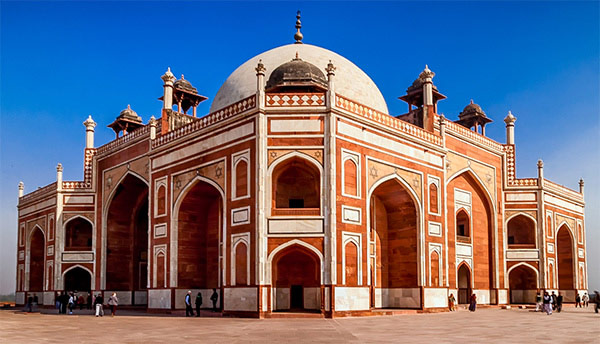 The Muslim tomb usually consists of solitary compartment or tomb chamber known as the huzrah in whose centre is the cenotaph or zarih. This entire structure is covered with an elaborate dome. In the underground chamber lies the mortuary or the maqbara, in which the corpse is buried in a grave or qabr. In the western wall is a mihrab, although larger mausoleums will have a separate mosque (a befitting example is Humayun’s tomb in Delhi).

In such cases the mosque stands discreetly at a little distance from the main tomb, the whole complex or rauza is surrounded by an enclosure. The tomb of a Muslim saint will be called dargah, literally meaning a court or palace. Almost all Islamic monuments were subjected to free use of verses from the Holy Koran, and a great amount of time was spent in carving out minute details on walls, ceilings, pillars and domes.

In the 14th century under the Timurid rulers, Islamic architecture underwent a change.
The narrow horseshoe arch of the Suljuqs was replaced by the true arch, an idea imported directly from Persia, later to become the hallmark of Islamic architecture.

However, Indian masons weren’t completely convinced of its holding power. They began using wooden beams as supports, and eventually the four-centered arch minus the beam support came into vogue. The darwaza or gate was a standard feature in every Islamic monument, be it the entrance to a citadel, city, palace, mosque or simply a gate leading to nowhere. The palace was normally within the ramifications of the fort, based on a similar structure as that of mosques pillars, domes, detailed engravings, although on a much, much more grandiose line. 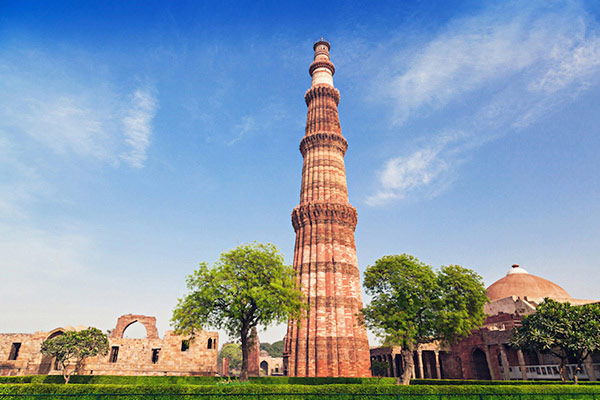 Amongst the secular buildings stand the palace and the fort, where emperors and kings lived and fought battles. These, again, were extremely elaborate and massive structures, of imposing height and splendid grandness, depending on the size of the empire under control. Built almost entirely of stone and marble, palaces could be as high as five storeys. At one time Emperor Akbar even announced that he would build Fatehpur Sikri from copper, but dropped the idea on the advice of his ministers.

Forts were essentially functional, complete with a little township within and various fortifications to engage and repel the enemy. The Tughlaqs were perhaps the greatest builders, taking the city of Delhi into five additional palace citadels through 1320 to 1415AD. It was the unwritten law for a new ruler to inaugurate his reign by beginning to build a palace or a fort. Restoration of previous buildings was rarely adopted, and it was understood that a new location would be chosen for a new construction altogether.

It was only Feroze Shah Tughlaq (mid 14th century) who took up restoration and repaired hundreds of monuments.

The final flickering example of Mughal architecture in India would perhaps be Safdarjung’s (1753-74AD) tomb in Delhi. Safdarjung was Ahmad Shah Abdali’s wazir and the Nawab of Oudh. Set on a high platform, the mausoleum is crowned with a high bulbous dome with four polygonal towers inlaid with marble. Built of red sandstone and marble panels, the effort was probably to make something similar to Humayun’s tomb, but by this time decay had already seeped into Mughal architecture.