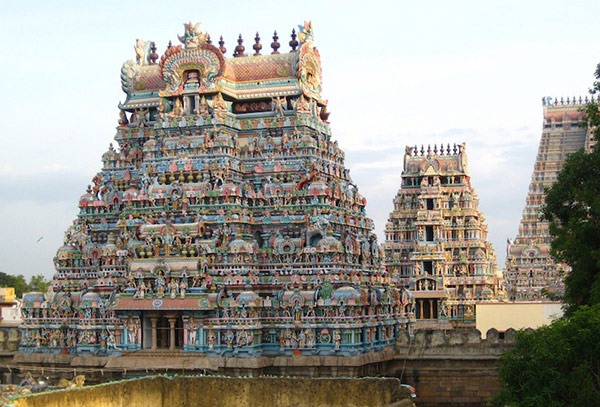 Hindu architecture concentrates immensely on the religious and spiritual. While Islamic architecture remained constrained to monuments, Hindus incorporated idols into their art, a feature unseen during Islamic rule since their religion forbids idol worship.

Hinduism is a religion based on religious worshipping of thousands of deities, and for each one of them there exist thousands of temples. 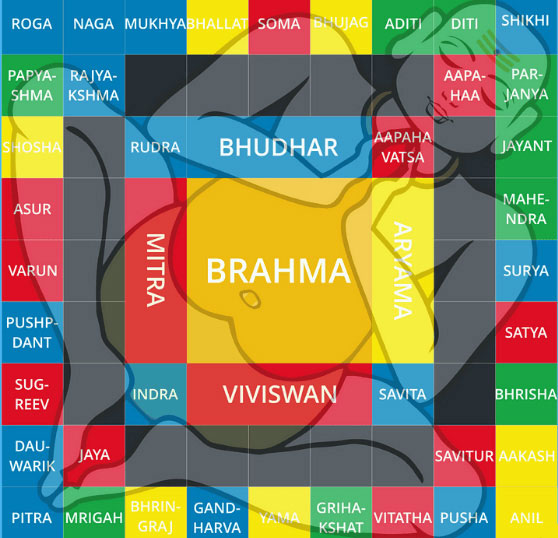 Talking about dimensions, the Mughals built the Red Fort in Delhi and it still amazes everyone today. Way back in 300BC, Chandragupta Maurya’s fort along the Ganges in Bihar stretched for an impossible nine miles long and a mile and a half wide! Made chiefly of wood, the fort housed a palace too. In comparison, the Red Fort is about 2.5kms in diameter.

However, only a couple of measly teak beams have survived from Chandragupta’s `wooden’ fort. The architecture of the Maurya’s was embalmed in timber, for rock and stone were not as freely in use then. The Mauryan period was also responsible for perfecting the art of polishing, so much so that wood glistened like a mirror.

However, Hindu temples are what Hindu religious architecture was all about. They are not merely places of worship; they are the very abode of the god inside in spirit, soul and body. After a period of decay while Buddhism was the popular religion, the revival of Hinduism in the 5th century AD gave a new boost to sculptors. Sheer rock was widely available, and sculptors carved out massive temples out of a single rock face. Technical skill required was high, and the cave temples in Ajanta and Ellora are perfect examples of the heights Hindu art could go to. Under orders from the rulers of the Rashtrakuta dynasty, sculptors carved out temples from gigantic solid stone after moving them away from the mountainside!

From the 7th to 9th century AD, the Pallava kings were busy in the Tamil area building Kanchipuram, a cluster of over a hundred religious Hindu shrines. Each one these shrines consisted of a sanctuary with a rising stepped tower. Early temples were mostly dedicated to Shiva, and were sparsely adorned in the interiors. Later, however, pillars bore the brunt of the carver’s tool, and these came to be richly adorned with scenes from the Ramayana and the Mahabharata. 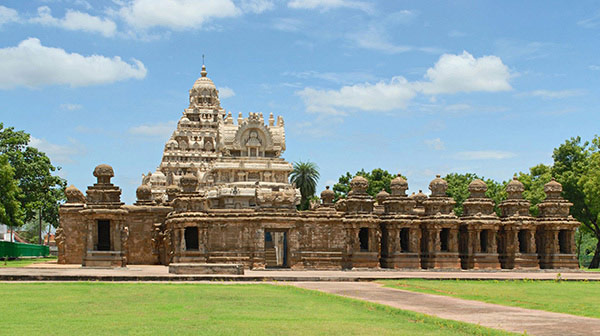 In Thanjavur, the capital of the Cholas in the 10th century, there stands a temple made entirely of granite. 207 feet high, the Thanjavur Hindu religious temple is famous for it's bronze and stone sculpture and for the narrative murals in the interior. Dynasties after the Cholas continued building temples, adding to the standard set by the Cholas and striving to build higher than before. Gopuras were massive temples, twice as high as they were broad with uneven storeys which diminished as they ascended. The construction of the temple itself was a complicated one, with carved and painted exteriors and interiors. Unlike Muslims, Hindus emphasized on liberal usage of images of gods, goddesses, their vehicles and even their devotees. This was mainly true for temples in southern India, while northern temples were lesser decorated as compared to their southern counterparts. 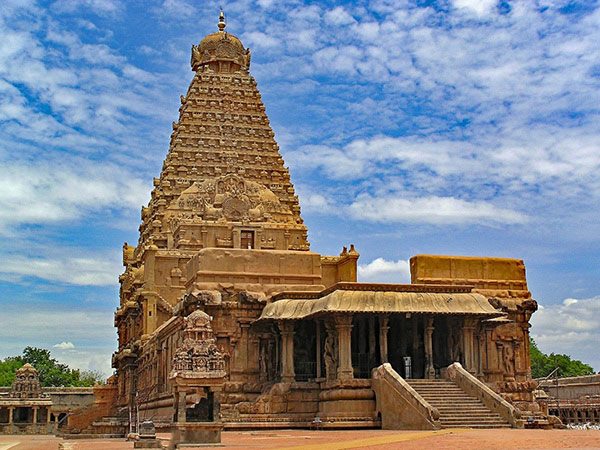 The temples in Khajuraho (950-1050AD), while dedicated to gods, are splattered with images of a sexual nature. Perhaps these  explicit images were carved into stone to ensure magical protection through sexual energy. The belief was that lightning, or the God of Thunder, would never strike a couple locked in sexual embrace, be it of stone or flesh. 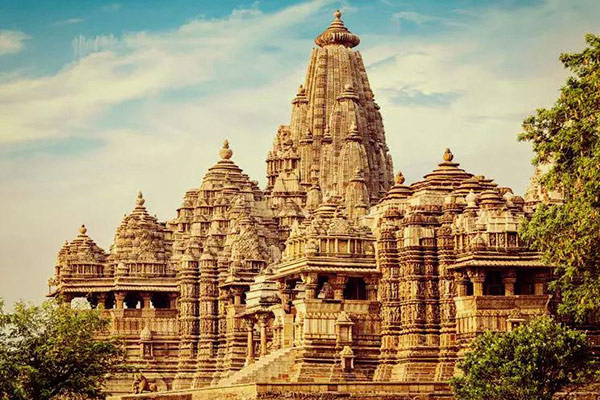 The Chariot Temples of Southern India.

The most amazing aspect of Hindu architecture in the 15th century would probably be the chariot temples in southern India. These religious temples inevitably feature massive rock cut chariots dedicated to the 2nd century BC Aryans. The Aryans were the first users of the wheel, and their chariots carried them to glorious victories throughout northern India. These huge chariots are drawn by elephants, although in comparison these stone animals are not even one tenth the size of the vehicle. 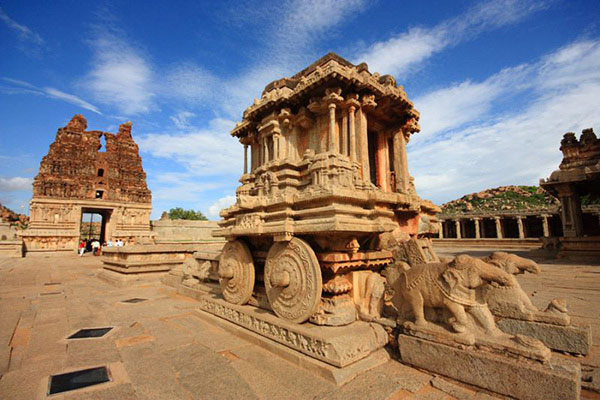 The 16th century saw the revival of Hindu temple architecture, especially in the south. Apart from the main deity, this time round there were images of a thousand gods, goddesses and mortal beings on the outside walls. Musicians, lesser gods, demons, armed guards, birds, cows; name it and you could find it on a temple facade. Beasts right out of folklore could be found in niches, carved out with such detail that they seemed almost alive.

The Pattern of Temple Construction

The construction of Hindu temples whether in the North or in the South essentially followed a similar pattern.

There’s the sanctuary or the vimana of which the upper and outer pyramidical and tapering portion is called the shikhara, or pinnacle. The vimana is a rather dark and gloomy place and houses the divine deity. This small area is called garbha griha, literally meaning `womb house’. The entrance is through a doorway, normally from the eastern side. The doorway is reached through a mandapa or pillared hall, where devotees congregate for prayers.

However, earlier temples may have had the mandapa at a little distance from the main Hindu temple (the Shore Temple in Mamallapuram near Chennai, circa AD 700), although this practice was done away with in later constructions. Later it became necessary to unite both buildings, making way for the antarala or intermediate vestibule. A porch or a smaller room called ardha mandapa leads up to a hall (mandapa), which in turn goes into a maha mandapa.

The most perfect example of a temple on this structure are the Khajuraho temples. Here, each chamber has its own separate pyramidical roof rising in gradual steps so that the final sanctum’s roof towers up, surrounded by smaller spires, finally forming a graceful, rising stepped pyramid.

In some parts of India, the ascending pyramid roof format was not followed. The roof in such temples was still pyramidical, but was formed of layers which gradually became narrower as they rose. A courtyard was built around the religious temple, and sometimes a wall would be constructed to ensure seclusion. The outside walls were treated by carving in an orderly group of repetitive miniatures. The shikhar or tapering roof was specifically based on this design which may have originated from the domed huts of central and eastern India.