Industrial Structures
Industrial structures need special attention in Vaastu analysis. In an industrial environment, the human potential is exploited to it's maximum in multidisciplinary activities - production clubbed with leadership function, research activity clubbed with market dynamics, achieving impedance-free movement of men and materials in crowded workplace etc.... This balancing act needs a perfect understanding of contribution of each of the Vaastu directions to the overall industrial space. 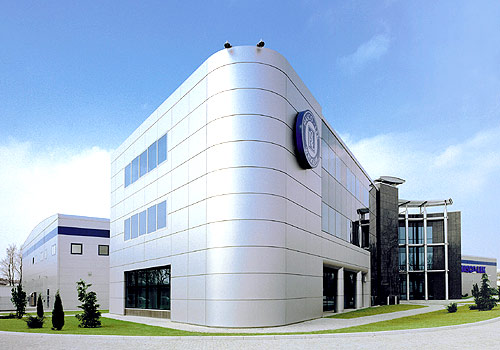 The Indian insight into Vastu planning is based on the concept of energy helix. This permits analysis of each part of the structure at individual level and then synthesizing these into the total structure. Vaastu shastra considers a Vaastu as a living being and as such, clubs the energetic of the Vaastu with various parameters to make it lively.

The character of a living entity is always reflected in its shape, form, size, and looks. Similarly, qualities like' harmony and rhythm are part of a symmetric structure. In industrial structures, the contribution of various directions is analysed on the basis of form and shape of structure, as well as the plot.

Considering the characteristics in an industrial structure, the following points can be noticed :-

The concept of 'North Light Structure' has been borrowed from Europe where temperatures remain within 15 degrees Celsius throughout the year. But, in tropical countries like India, most of the time the sun remains in the southern zone. Even in the 'Uttarayan' (the winter solstice) the decline is hardly 10 degrees relative to the North. As such, the temperature differentials during the day exceed 15 to 30 degrees Celsius. In such a situation, projecting entire roof surface to the south to get northern light is an act of ignorance from environmental considerations. Due to high thermal absorption, such types of roofs disturb the entire electromagnetic field aligned with the structure. As per Vastu science, these structures tend to capture what is known as 'South Rhythm'. Case studies reveal that industrial units with these types of roofs suffer from low productivity and poor growth. All such structures need critical changes for achieving qualitative environmental enrichment.

Work Environment for Executives and Staff

Vaastushastra recommends that important executives should face the North direction with their sitting position in the Southwest zone. All the staff and workers should face East with their activity zone located in Central, Northern, or Eastern zones. From Vaastu energetic point of view, Southwest zone represents the highest point of the helix, and decisions taken in the confines of Southwest zone flow without friction to lower boundaries of the structure. The North-facing executives benefit from eternal flow and properly tuned psyche.

In an industrial undertaking multiple activities are taking place simultaneously. To achieve better co-ordination and cohesion in these activities, it is desirable that specific operations are restricted to definite zones on the basis of involved energy levels. Landscaping plays an important role in providing cosmic envelope to the Vaastu. Reshaping of a plot by landscaping is the simplest way to rectify the incorrect shapes and slopes in the plot. Remarkable improvement in the Vastu energetic results from the formation of external helix through load relocation in landscaping and planting of specific trees in landscaped gardens. In respiration process of the plants, rare gases are emitted, enriching the environment. This apart, the environment benefits from the plant biorhythm.

If any digging or excavation has taken place in Southwest, Southeast, or Northwest zones for locating underground vessels or water tanks or septic tank, this source of negative energy should be compensated by material loading at landscape stage.

To reduce the extended Southeast related ill effects in some plots, water body in the Southeast zone is sometimes advisable.

It is said that life flows without friction and remains in natural rhythm if it is based on the logic of the 'Helix'. The helix form is followed right from the smallest virus to the gigantic 'Milky Way'. Most ancient scriptures refer to helix as the sacred curve. There are five different methods for implementing the 'helix' in a plot or a house, for effective Vaastushastra remedies.

The helix in the plinth through this method can also be attained.

Pattern of flooring as per the requirements of the directions;

• Marble in the Northeast, North, or East zone reflects the photon energy and maintains the East and the North as source directions of positive energy.

• Agra red stone in the Southeast zone suits the thermal activity of the zone.

• Kota or Tandoor stone may be used in the Northwest zone.

Vaastu shastra is a science dealing with natural forces and energies, some directly experienced and some hidden. On the face of it, this discipline looks mysterious and ambiguous. But, all its rules and regulations can be traced to the basic sciences, particularly to the principles of physics pertaining to forces and energies.

Here we will present Vastu analysis for a typical industrial structure - buildings for a pharmaceutical manufacturing plant. For buildings housing medicine production facility, the concepts of quantum healing and energetic are of utmost importance. Vaastushastra has immense scope in such cases to provide virtuous bliss of Nature to the whole production set-up.

Multiple paths are available for improving any given Vastu situation. Here we are outlining the concepts and methodology involved in this process.

To achieve harmony with nature and bliss in the surrounding environment, it is essential that a definite shape is given to the plot and it is aligned properly with the geomagnetic axis. For the plot under study, the following measures are recommended as per Vaastu shastra;

Internal Changes for the Vaastu

The analytical approach adopted here has benefited the pharmaceutical unit immensely; in management-workers relationship and in smooth running of the plant at optimum levels. Taking recourse to Vastu principles at planning stage has distinct advantages - smooth progress of work and salubrious working conditions.

For industries too, the selection of site is very important. Besides the fact that sufficient water and electricity should be available, the vastu of the plot, plot such as the shape of the plot, the roads facing the plots and the ground levels inside and outside the site are very important points that are to be observed.

The various principles of Vastu, which aid in setting up an industry, are as follows.

Vastu Advice For The Industry

Industries should be such in such a manner that the production should increase and so the movement of finished goods. If they violate the principles of vastu, that can lead to less production, no sale, problem with labour or any hazardous risk.

We have to take care of the following points while studying about the vastu of the industry.