Ketu is a mysterious planetary influence which, like Rahu, is malevolent and afflictive unless located in a powerful position or conjoined with a beneficent planet. Ketu governs theology, monastic life, crime and punishment, hidden enemies and dangers, and the occult. Unless correctly balanced, Ketu can cause poverty and other obstructions in one's life. Ketu is associated with suffering and the consequent aspiration for spiritual liberation.

If Ketu is exalted one will be and wealthy and protected from evil. But if Ketu appears in a weak or harmful position in one's horoscope, one becomes prone to fatal diseases of a mysterious nature as well as compulsive gambling. INFRA-RED is the cosmic color transmitted by cat's eye gems. Infra-red color waves are the hottest of all the cosmic rays and are known to be useful in many chronic and terminal illness such as cancer and all forms of paralysis. Infra-red color also aids digestive problems and skin diseases. Ketu astral talismans can also enhance psychic powers, confer protection from hidden enemies, and avert dangers such as drowning, intoxication, and criminal punishment. Ketu is also said to bring good luck to gamblers (if well-placed).

GEMSTONES ruled by Ketu include Cat's eye, chrysoberyl, beryl, apatite,tourmaline and other yellow to greenish-brown gems which display a strong chatoyant "cat's eye" light reflection on the surface and often within the crystal when cabochon cut. These gems should also possess a high degree of transparency in order to properly transmit beneficial Ketu energy.

NOTE: As Ketu is incompatible with Sun and Moon, cat's eye gems should not be used with rubies or pearls. Specifically designed talismans like the Navaratna (nine gems setting) are an exception to this practice.

The particular hue or type of cat's eye color recommended for each social-religious-economic station of society are listed as follows:

1) Religious practitioners, scientists and educators should use honey yellow;

2) Soldiers, administrators and bureaucrats should use honey brown;

3) Farmers, bankers and traders should use honey green;

4) Servants, laborers and workers should use dark green. 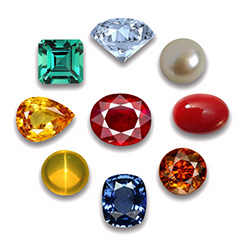